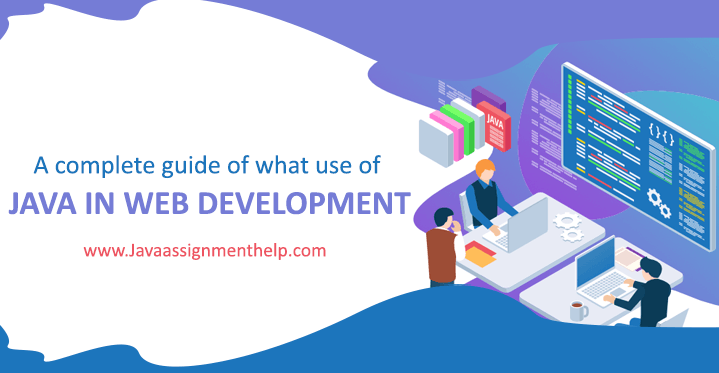 According to the programmers, It is a universal language. Many numbers of tools run on a java program. It includes in field of web development.

In this blog, We discuss A complete guide of what use of java in web development.

What is the definition of Java?

Java is a high-quality programming language independent of the platform. Its designs to operate over the Internet in a classified environment. It Interfaces functionality that gives you a better “look and feels” over the C++ language. Programmer simpler to use comparison C++, which operates on the object-oriented programming model structure. It uses to play online games, video, audio, talk with people around the world, Banking applications.

Programming technology allows you to run different operating systems. What use of Java by many of the largest interactive websites. It is used to build stand-alone applications that can run on a single device. It is used to construct a small applet-based application program. Which is used for the Web page?

These are types of java application

These are the advantages:

It language simple, easy to design, easy to write. And easy to compile, debug, and learn any other programming languages.

It runs on distributed systems. This is designed to run on distributed computing. Its network programs are the same as sending and receiving data from and to a server.

It is comfortable. The environment for Java language, compiler, interpreter, and runtime is stable.

Why should you learn the Java Programming Language?

These are the reason for the programming language:

Java is Simple to learn:

Many people shocked to see the main reasons for studying Programming language. And finding it to be the best language in programming. If you have a steep learning curve, it will be hard in a short period to become competitive, as is the case for most of the professional projects.

Open-source libraries ensure It is used everywhere. Apache, Google, and other organizations have contributed a lot of great libraries, making Java simpler, faster, and cost-effective to build.

There are structures like Spring, Struts, Maven that ensure Java architecture meets best practices in software craftsmanship, encouraging the use of design patterns.

Java is an Object-Oriented Programming Language:

ava is an object-oriented programming language. java easy to build an OOP program. Which helps to keep the framework scalable, versatile and extensible.

The biggest strength of Java programming language and platform is a strong and flourishing community. No matter how strong a language is, if there is no group to help, assist, and share their expertise, it wouldn’t survive.

It has plenty of active forums, StackOverflow, open-source organizations, and a range of programming user groups to support it all.

It was the primary explanation for the rise in the 1990s. The idea of platform independence is brilliant. Java tagline “write anywhere run. The acronym “WORA” has been sufficiently appealing to draw lots of new growth in a programming language.

It is one of the reasons why It is the best programming language; in the Windows world, most programs are developed and run on the Linux platform.

What use of Java in web development?

According to program metrics, inform us that a program. The code writes in the programming language of Java four times.

The programming language supports sound coding practices and implements automated garbage collection to prevent memory leaks. Based on the principle of programming language, it can reuse current, tested code and introduce fewer bugs based on its JavaBeans component architecture and wide range, easily extendable.

Write and Use in any Java Application :

Any software source code is written in the programming language of Java, which is compiled into machine-independent byte codes and run consistently on any programming platform.

The programming language is easy and more straightforward. It manages your development time up to twice fast. The programs will require fewer lines of code.

Using Java Web Start software, users will be able to launch their applications with a single click on the mouse. An automatic version checks initially whether users are always up to date with the latest version of your software. If an update is available for it, Web Start software will automatically update their installation.

Why is Java such a traditional choice among modern-day web development?

The response lies primarily in the rigorous testing, updating, and delivery quality that It has historically provided. A dedicated group of web developers, architects, and enthusiasts have tested, developed, expanded. With roots that date back nearly two decades, It has developed gradually over the years.

It designs to allow the development of high-performance portable applications for the widest possible variety of computing platforms. Enterprises will offer more services by making applications accessible through heterogeneous environments.

It has become invaluable by allowing the developers to: