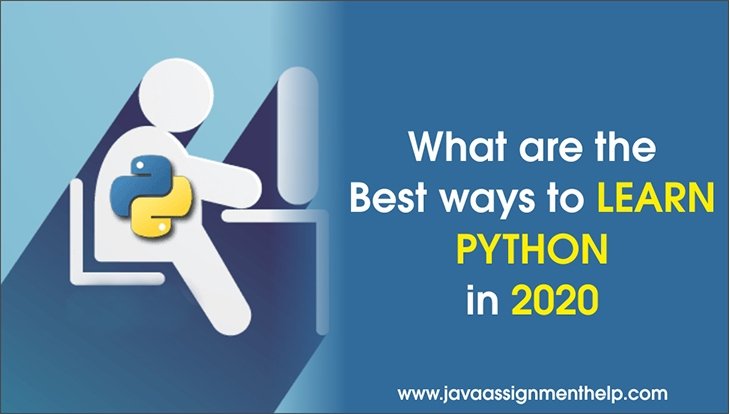 In this article, we are going to discuss the best ways to learn Python.

Python is an essential programming language that any developer should know. This language is used to build websites, create learning algorithms, and perform other important tasks. But Python can be intimidating, frustrating and difficult, especially if you’re not sure how to approach it.

Our Java Assignment Help experts will discuss the complete details about the best ways to learn python.

Python is a broadly used dynamic programming language as compared to other languages like Java, Perl, PHP, and Ruby. This is commonly called scripting language. It gives support for automatic memory management, multiple programming paradigms, and implements the basic concepts of object-oriented programming (OOP).

Python is a strongly typed procedural language with support for a vast and comprehensive standard library. Python’s library provides support for many Internet protocols such as FTP and IMAP. It has a unique syntax, which makes it different from other programming languages such as Java, C++, and C. Read this blog on the best ways to learn python.

Python has some of the best applications. It is widely used in the development of frameworks such as Django and Pyramid, and advanced content management systems such as Plone and Django CMS.

How does python work?

Python is interpreted and has the structure of a classic compiler. It runs directly from the source code and converts the code to an intermediate language. You can compile your source with the help of all modules. The best way to see how python works by running python interpreter is and type code in it.

Python is a powerful and interesting programming language as compared to Java and Ruby. Before learning the python programming you need to know about the features of python:

Since it is open-source, it means that the source code is also available to the public. So you can download it, use it as well as share it.

The graphical user interface in Python can be used using modules like PyQt5, PyQt4, wxPython or Tk.

PyQt5 is the most popular choice for creating graphical apps with Python.

Python is a high-level language. When we write programs in Python, we don’t need to learn system design, nor do we need to manage memory.

Python is an extensible language. We can write our Python code in c or c++ language and also we can compile that code in c/c++ language.

Python is a portable language

Python language is also a portable language. For example, we write the Python code for Windows and if we want to run this code on other platforms such as Linux, Unix, and Mac we don’t need to change it, we can run this code on any platform.

Python is an Integrated language

Python is also an integrated language because we can easily combine python with other languages such as C, C++, etc.

Python is an interpreted language. Because their code is executed line by line at once. Like other languages c, c++, java, etc., there is no need to compile Python code, making it easier to debug this code. Python’s source code converted into an immediate form called byte code.

Python is a dynamically typed language. This means that the type for variables is fixed at run time, not in advance. Because of this attribute, we do not need to specify the type of variable.

Python can be used to create web-applications. This is because Python is used to create these applications. Common-backend is the logic that goes into creating these outlines and many libraries that can help integrate protocols like HTTPS, FTP, SSL, etc.

Development of the game

Python is also used in the development of interactive games. There are libraries like PySoy that are a 3D game engine supporting Python 3, PyGame that provides functionality and a library for game development.

The data is money if you know how to get important information that can help you take calculated risks and increase profits. You study, operate and extract the necessary information on the data you have. Libraries like Pandas, NumPy help you extract information.

You can also visualize data libraries like Matplotlib, Seaborn, which are helpful in plotting graphs and much more. This is what Python offers you to become a data scientist.

Python can be used to draw large amounts of data from websites, which can help in many real-world processes such as price-comparison, job listings, research and development, and much more.

Business Applications are different than normal applications because they cover domains such as e-commerce, ERP and many more. They need applications that are scalable, extensible and readable and Python provides us with all these features. Platforms like Tryton can be used to develop such business applications.

Python can be used to develop applications that are multi-task and also output media. Video and audio applications such as TimPlayer, Cplay have been developed using Python. They offer better stability and performance than other media players.

Python is based on C that means it can be used to create embedded C software for embedded applications. This helps us execute high-level applications on small devices that can calculate Python.

The best ways to learn Python is to perform everything you read. Install Python and start coding. You can learn as soon as you go!

But, before you’re giving some tips to make it easier.

Python is improving all the time. There are only a few people who can legitimately claim to fully understand the language, and they have made it. While you can instantly get comfortable with Python, even very experienced Python developers are still learning!

I hope this guide has been useful on your journey.

If you need Python Programming help then come to us at Java Assignment Help. Our experts are always ready to assist you with all of your Python programming assignment help. Our team has an efficient work process and they are equipped with adequate skills and techniques to provide you the python homework help.