If you are struggling with the problem of the cause of memory leaks in java and how to avoid them?. Don’t worry; we are here to solve your problems.

A memory leak happens when the developer allocates a portion of memory in a heap and forgets to remove it. In non-garbage-collected languages, artifacts on the heap lead to memory leaks until they released.

With Java and the Garbage Collector (GC) introduction, the responsibility for handling memory deallocation passed on to it. So developers shouldn’t worry about this at all from the first sight.

But it can still happen, and the cause of memory leaks in Java language is a situation where the application no longer uses some objects. Still, the Garbage Collector does not recognize them as unused and release them.

In this article, we discuss all the useful ways of the cause of memory leaks in java.

What is Memory Leak?

The program no longer uses objects. But Garbage Collector is unable to delete them because they referenced.

Not all unused objects unreferenced, however. Some of those referenced! That is where the leaks in memory come from.

How to avoid the memory leak?

These are the following ways:

For code that complies with JDK 1.5 +, the eclipse will give alerts and errors to you for obvious cases of leakage. To be more accurate, if the connection broke. But the object closed, something that implements closeable can alert you. Yet leak detection in eclipse projects always enabled. Maybe you need to turn them on.first. Go to the settings of your project 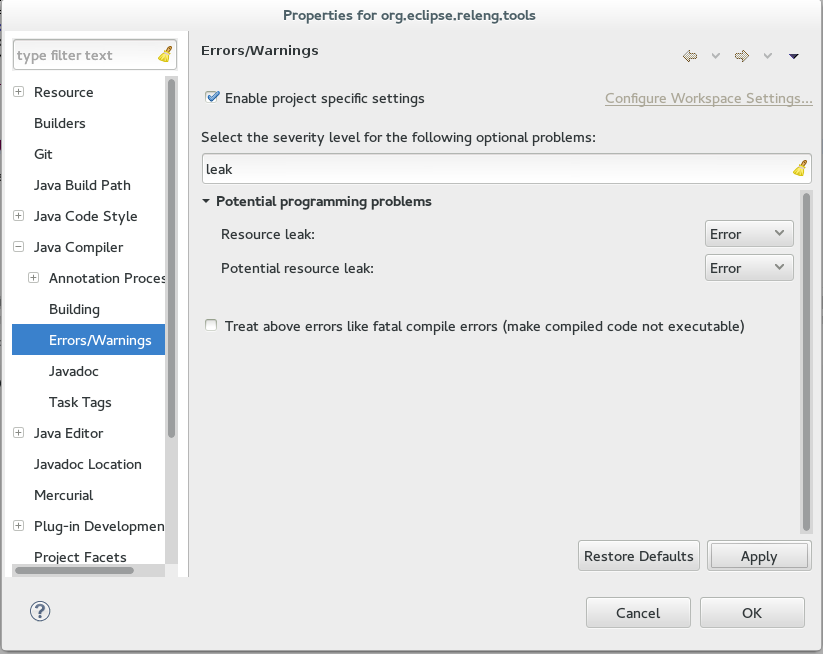 Yet not all file closures and leaks detected even with fancy Eclipse hocus pocus. Especially when working with legacy code (pre 1.5), you are likely to run into leaks. Because they write before being implemented as ‘closable.’ Or sometimes, opening/closures of files nested so deeply that they detected by the eclipse.

If you’ve got that far you’re going to have to roll up yourself and do some manual work. You read all of your code and try to decide out where the leak happens. To help with this process: I recommend that you try using a tool such as VisualVM.

5 Quick Tips How to Learn JavaScript Faster for Beginners

How to Find Leak Sources in Your Java Application?

These are the following ways to find the leak in java Application:

One of the fastest ways of identifying a memory leak is to allow for repetitive garbage collection.

By adding the -verbose: GC parameter to our application’s JVM configuration, we allow for a very detailed GC trace. In default error output file, summary reports displayed, which should help you understand how your memory is being managed.

The second technique is the one we’ve been using throughout this article – and that’s profiling. The most famous profiler is Visual VM – which is a good place to start moving past command-line JDK tools and into lightweight profiling.

In this article, we used another profiler – YourKit – which has some additional, more advanced features compared to Visual VM.

Lastly, this is more of general good practice than a particular technique to deal with memory leakage.

Put – thoroughly review your code, conduct regular code reviews, and use static analytics tools to help you understand your code and system.

Then, it is also critical to have the techniques and tools to see what is going on at runtime, as the leak occurs. Static analysis and careful code-focused reviews can only do so much. It’s the runtime at the end of the day that will show you the more complex leaks that aren’t identifiable in the code immediately.

Lastly, leaks can be notoriously difficult to find and reproduce as many of them occur only under intense load, which generally occurs Causes of Memory Leaks in Java. This is where you have to go beyond the analysis of code-level and work on two main aspects-reproduction and early detection.

We have years of experienced causes of memory leaks in java know-how. Day and night, they work for your programming assignment help queries. You can Submit work from anywhere in the world at any time. To support you with your questions, we are available 24 * 7.