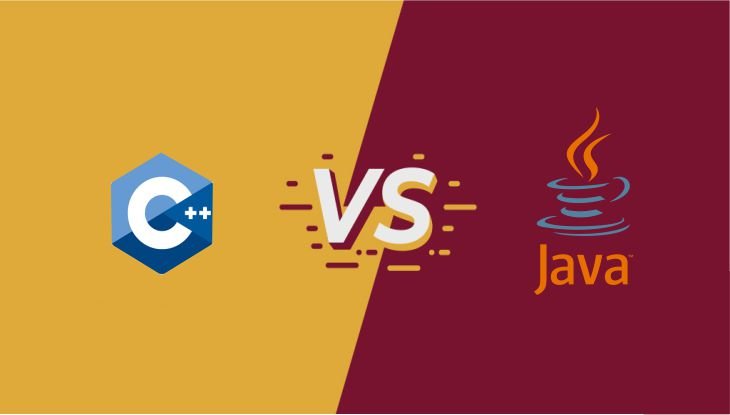 As everyone knows that C++ and Java, both programming languages are object-oriented, yet these languages differ in several ways. C++ is a derivative of the C language with the characteristics of an object-oriented and procedural programming language. Basically, C++ is designed for application and system development, while Java is designed for virtual machines that consist of complete libraries to support existing platforms.

Basically, Java is developed for application programs with the functionality of an interpreter and is also designed for network computing. Now, let’s look at some of the main differences between C++ and Java in tabular form.

Learning C++ and Java will give you a basic understanding of programming. So anyone who is new to programming is usually learn either or both of these two languages before going to other languages and technologies. This is the reason why schools and colleges that teach programming have C++ and/or Java as necessary subjects so that the students can get a good idea of what is C programming language.

Basic of C++ vs Java

Both Java and C++ are very popular in production for years. Both of them have the same syntax, and they both give power to some of the market’s largest enterprise platforms. As a matter of fact, most C+ programmers will tell you that converting them into a Java project is easy because the style and syntax are very similar.

Even with similarities, however, the two languages are different. Java is an interpreted language – “Write once, run anywhere.” Therefore C++ is a compiled language. This difference will play a huge role in your future project.

Both of these programs can empower different types of applications. Java is the foundation program for Android applications, so it’s the usual choice for mobile developers. C++ is a low-level language that is used to power hardware and low-level programs such as device drivers and network analytics tools. Because they can both perform the same functionality, it can be difficult for clients to define the correct platform.

What is the C++ language?

It encapsulates high and low-level language features. So, it is seen as an intermediate-level language. First, it will be “C with classes” because it had all the features of the C language.

The C++ language was developed by Bjarne Stroustrup at AT & T Bell Laboratories. Stroustrup was a great follower of C and an admirer of Simula67. He wanted to add the best of both languages. He was trying to create a language that supports object-oriented programming features and still retains the power of C. The result is C++.

What is the Java language?

Java is a powerful general purpose programming language. It is used to develop mobile and desktop applications, big data processing, integrated systems, etc. According to Oracle, the company that owns Java, Java runs on 3 billion devices worldwide, making Java one of the most popular programming languages.

The Java programming language was originally developed by Sun Microsystems, which was initiated by James Gosling and released in 1995 as a central component of Sun Microsystems’ Java platform.

The latest version of Java Standard Edition is Java SE 8. With the advancement of Java and its wide popularity, multiple configurations were created to suit various types of platforms. For example: J2EE for enterprise applications, J2ME for mobile applications.

C++ and Java have some similarities. Some of them are:

Differences between C++ and Java

Let’s discuss the main differences between C++ and Java

Java: Java does not support destructors; It has an automatic garbage collection system.

C++: It supports destructors; it gets invoked when an object is destroyed.

Java: It does not support conditional compilation and inclusion.

Java: It supports threads that are built into Java. If there is a thread class in Java, override the Run method that inherits to create a new thread.

C++: It has no built-in support. It depends on third-party libraries.

Java: Java does not support default arguments. There is no (::) in Java. The definitions of strategy must be within one category, so there is no need to determine the scope.

C++: C++ supports default arguments. C++ has scope resolution (::), which utilize and characterize a strategy outside a class to get to a worldwide variable inside from the degree where a neighborhood variable additionally exists with a similar name.

Java: There is no Goto statement in Java. Keywords cast and goto are reserved, even if they are not used.

C++: C++ has goto connection. Still, this is not seen as a great practice for the use of Goto explanations.

Java: Java does not offer multiple inheritances, not in the same sense as C++.

C++: C++ supports different inheritance. The keyword uses virtual to resolve the ambiguity between different conditions if any.

Java: Exception handling is different because there are no destructors. In Java, try/catch should be defined if the function declares that it can throw an exception.

C++: In C++, you can skip this attempt/get regardless of what the capacity gives.

Java: It has a method of overloading in Java but no operator does overloading. does use the + and += operators to concatenate strings and String expressions use automatic type conversion, but that’s a special built-in case.

Java: Java has built-in support for documentation comments (/** … */); Therefore, Java source files may have their own documentation, which is read by a separate tool, usually improved in Java Doc and HTML. This helps in maintaining the documentation in an easy way.

Java: Java is interpreted for the most part and, therefore, is platform-free.

C++ vs Java: Which one is better for your future?

Both Java and C++ can be used to design a variety of programs. However, the language you use determines what you want to develop.

C++ is usually owned for the software that is “Hardware-level Manipulation is required. One difference between C++ and Java is that C++ is closest to the machine language, which makes it much more viable for software that needs to run quickly and require your computer’s ability to work directly with memory, hard drives, CPUs or other devices. C++ is also popular with gaming applications where speed is required.

You can handle the hardware with Java, but it’s not a common language for low-level programming since it’s a “safer” language. Because Java doesn’t allow you to do some work to protect PC, it’s preferred for top-level applications.

Java is the basis of the development of Android, so if you want a mobile application especially for Android, Java will be the language of your choice. It is common for web and desktop apps as well as applications that run on servers. Java is generally known and versatile, so it’s also easier to find a Java developer than a “harder” language such as C++.

Overall, C++ can be used for almost anything but it’s not always necessary to use it. Java is usually sufficient and can be more effective for your project.

In this article we discuss the whole difference between C++ vs Java. Both C++ and Java are powerful programming languages. You can consider learning both to get a solid understanding of computer programming.

In terms of competitive coding which usually contains arrays, string handling and others which is the better choice: java/c++?