Because there are so many programming languages to choose from, developers are frequently confused about which one is best for their project. Therefore, today we will cover Java vs Go.  Both Java and Go are very popular languages worldwide, and they compete for control of server-side web applications.

Java is about 25 years old language, and Golang, on the other hand, is very recent. Nevertheless, both of these programming languages create efficient and reliable softwares.

For years, Java language has ruled the software development industry, but Golang continues to rise. Before further discussion about Java vs Go, let’s first see the basic introduction of both these languages.

The Java programming language was created by James Gosling at Sun Microsystems and introduced in 1995 as part of the Sun’s Java Platform. It is generic, kind of compiled, and statically typed.

Java is often regarded as the most widely used programming language of all time. Despite being a very old language, it is still used in thousands of different applications worldwide.

Due to its enormous popularity, you can find a plethora of ready-to-use modules and code on the internet. As a result, Java programming is much easier because you can easily find the prewritten code for anything you want to do with Java.

JVM is needed to run Java code, which is the only thing on which it is dependent. In Java, the code is broken down into bytecode by a virtual machine, which then compiles it very quickly at runtime. Java can also be interpreted, as it is converted to bytecode first, and then that bytecode is interpreted.

Pros and Cons of Java Development

Now, let’s see the primary pros and cons of the Java programming language.

Go or Golang is a Google-developed general-purpose, open-source language that launched in 2011. Google’s developers Ken Thompson, Rob Pike, and Robert Griemsemer have developed this language. Golang is a compiled, statically typed, and multi-paradigm programming language.

See also  How Long Does It Take To Become A Web Developer?

The syntax of Go is similar to that of C. It was created with scalability and current multicore processors in mind. It supports packages and concurrency for effective dependency management. Moreover, It is a high-performance language that, like any other dynamic language, supports environment patterns.

Pros and Cons of Golang Development

We’ll look at the primary benefits and downsides of the Go programming language here.

Java vs Go the main Differences

The main differences between Java vs Go are as follows-

To some extent, Go is both object-oriented and functional. We can also say that it is a hybrid of C and C++. In the runtime, Golang interfaces with external C code and makes use of a reference registry.

The execution system is unaware of the actual pointers. Information can be gathered by analyzing the memory allocated. So, Go is the clear winner in Go vs Java: Memory Usage.

Go is a simpler language to learn and use than Java. The syntax of Golang is small. You can fit the most of information in your head, so you won’t have to spend much time checking stuff up. It’s also incredibly simple and straightforward to read.

On the other hand, Java is a statically typed language with a significant emphasis on the OOP paradigm. It is much stricter than Go.

You have a lot more freedom with Go. You can use dynamic variables, and there is no need for classes.

The downside is that, as Go does not require you to execute things in a specific order, you may get many errors when running your program. This is when the lack of fundamentals bothers you. So, Java protects you from yourself.

Winner: Golang – It is simple to learn

Java has been around for a long time and has an extensive support network of thousands of programmers. The fact that there are so many experts on it on the internet increases its charm. Because some of them have been using Java for more than 20 years, they have an excellent knowledge of it.

However, we are not saying that Golang doesn’t have a community. If Java’s support base comprises the world’s most experienced experts, Go’s community is made up of energetic newcomers. Because Go is a new language, the community is still incredibly passionate and engaged.

While it may not have the same legacy as Java, plenty of Go resources are available, such as example code, open-source libraries, and ready-to-help Go developers.

Winner: Java – Java has a bigger community than Golang.

For a long time, the Java community has been utilizing the language. They’ve asked for various features to be introduced to the language, and many of them have been implemented. Therefore, Java is likely to have all the functionality you may need.

On the other hand, Go is intended to be straightforward. Therefore, it’s supposed to have less features. Furthermore, it is designed with the intention of being easily readable by everyone and uses a similar code structure so that the next programmer can pick up where the previous one left off.

This may appear to be a bit restrictive, yet it results in less or no headaches while working as a group.

Speed is an important factor in the competition of Java vs Go. Because of the way Go is compiled, it is faster than Java. It compiles its code without the use of a virtual machine. Instead, it is directly compiled into a binary file.

However, before Java can be compiled to machine code, it must first be compiled to bytecode by the Java Virtual Machine. While this is beneficial to Java’s program, it causes it to slow down.

Exceptions are used in Java to handle errors. However, instead of exceptions, Go employs errors to indicate events like end-of-file and runtime panics to indicate runtime failures like trying to index an array out of bounds.

Golang is a scalable and straightforward language. It offers lightweight threads called goroutines that have excellent multithreading capabilities and efficiently manage concurrent operations. It is modern and secure, making it suitable for cutting-edge technology.

On the other hand, Java is designed to be portable. It allows you to code once and run anywhere. The Java virtual machine interacts with the hardware to make the code work on any system, making it platform-independent. However, launching the same code on different systems may not always be good.

We can compare Golang vs java popularity on the basis of the number of Google searches for both terms over the past few years. Below is the Google search trend graph for Java and Go, depicting the past 5 years of worldwide searches. We can clearly see that Java is more popular than Go. 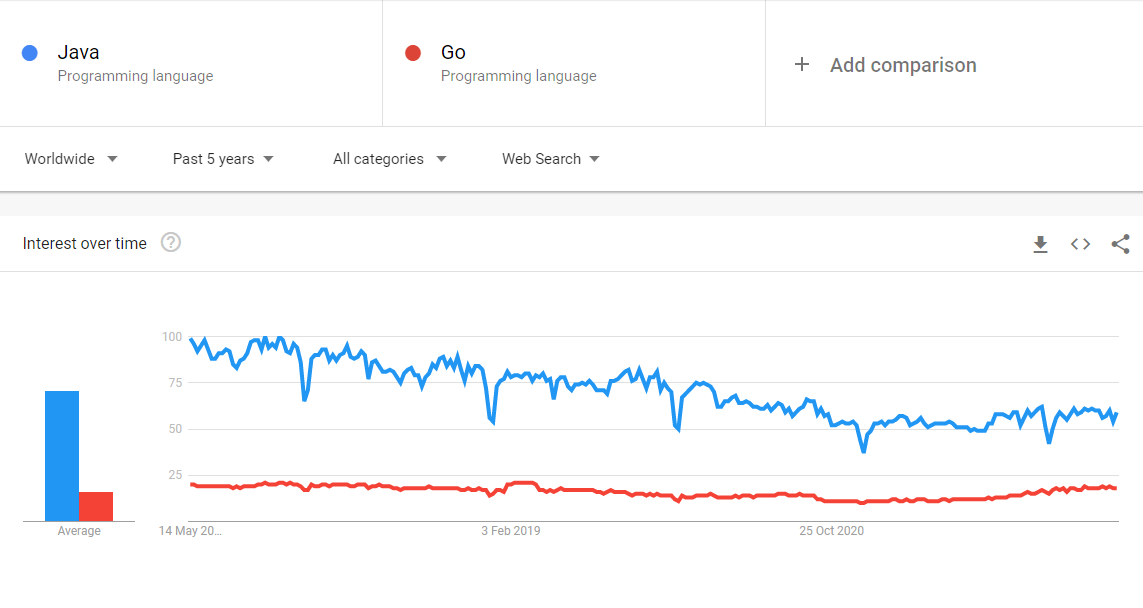 Head to Head Comparisons between Java vs Go

Why is Go better than Java?

Go is relatively new in the game, and Java has been there for a long time. Yet Go is better than Java in some cases. Go is quicker than Java since it is compiled directly into binary code. If you want to develop web servers or code systems, you should choose Go because it is faster and has better concurrency support. So, we can say that Go ranks better in Java vs Go performance.

However, if you want an enterprise-level, general-purpose language, Java can be a great choice for you. It has a large supportive community, several libraries that can accomplish almost anything with the support of Object-Oriented Programming. In general, no language is perfect in all aspects, and which one is best relies entirely on your project requirements.

Go isn’t meant to completely replace Java, but to perform better in the areas where Java needs improvements. Some of the examples of the features where Go perform better are as follows-

In this blog, we have provided detailed information about Java vs Go. Despite their vast differences, both Java and Go are useful and powerful programming languages. It’s entirely up to you whether to go with the exciting newcomer Go or the legendary language Java.

Apart from Java vs Go, if you have any difficulties in any programming language or need Java programming help, you can discuss it with our experts anytime.

What is the difference between Go and Java?

Go is a concurrent and procedural language whereas Java is object-oriented. Go uses errors while Java uses exceptions. Unlike Java, Inheritance is not supported in Go. Threads are cheaper in Go whereas expensive in Java. Moreover, the programs written in Go are more compact than Java.

No, Java is not dying. Despite being a very old language, Java is not losing its popularity. Java is still in huge demand. There are a lot of Job opportunities available for Java developers. So, there is no sign of losing popularity of Java.